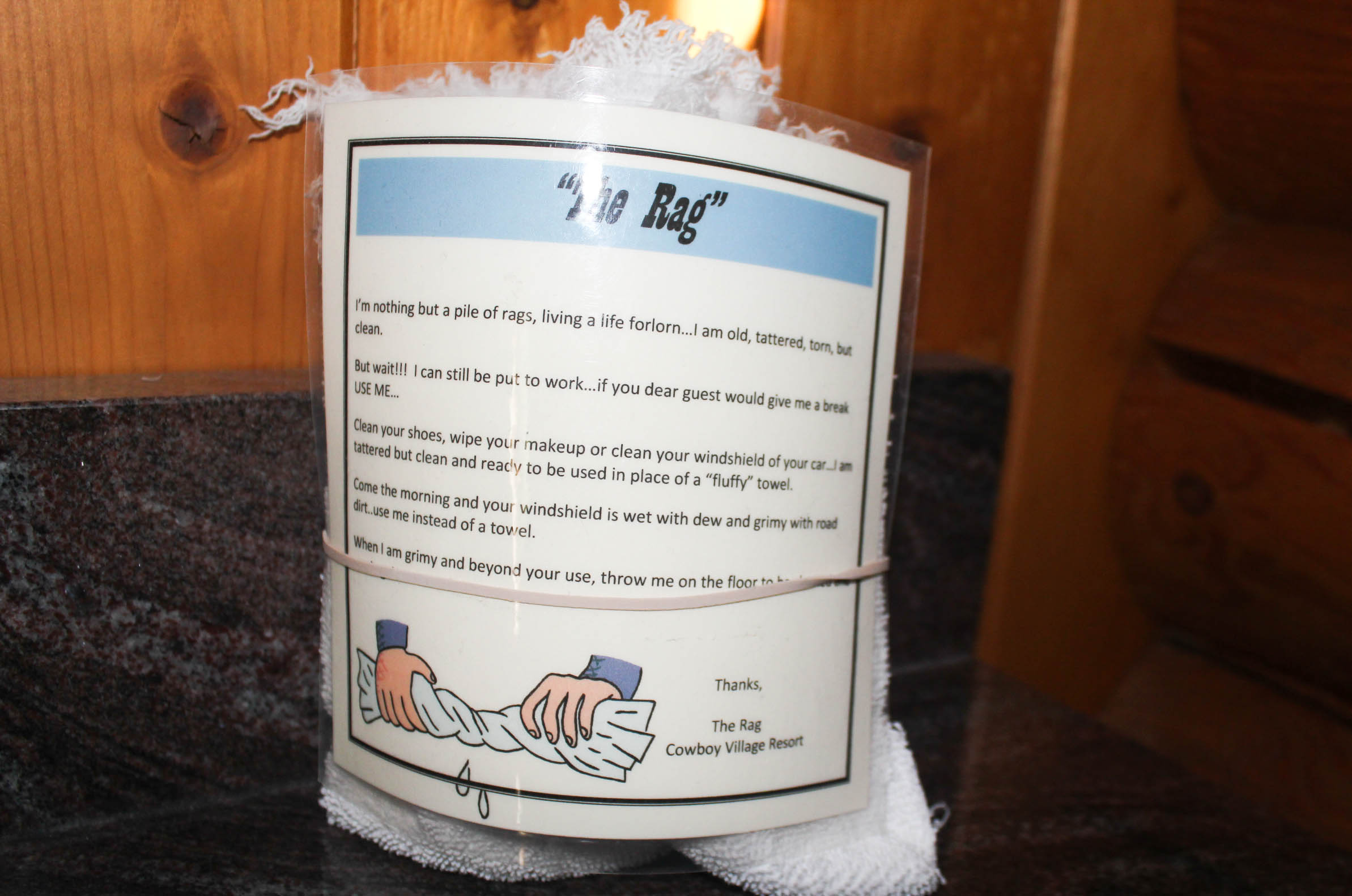 When I stayed in one of the cute little cabins at The Cowboy Village Resort in Jackson Hole, Wy, this bundle of rags and message were left on the bathroom vanity. What a great idea for a hotel that I’m sure has their “fluffy” white towels indelibly stained on a regular basis. And what a great idea this would be to have in a guest bath in the homes of us regular hosts and hostesses.

* There’s been occasions when I’ve been a guest in someone’s home and would have like to have a rag to use instead of a towel.

Simple Dollar posted a good article about Paper Towels and Frugality that compares the cost effectiveness of using paper towels vs. rags. It goes into the ‘cents’ of it and is more calculating than I would ever do, so I’m happy it was done for me. Their calculations determined the cost is about the same for a light task, but a rag is more cost effective for heavier jobs. It’s a good read.

Given all this, we just default to using a rag for as many kitchen tasks as possible. Even if it’s a light task, the cost is roughly the same as a paper towel, and a rag is less expensive and more convenient for a heavy task.

We leave the paper towels for the handful of things they really shine at, usually involving food preparation tasks where you’re trying to dry off a piece of meat or some vegetables. For everything else, we turn to the rags.

Cost aside, one could argue that it takes water (resources) to wash a rag, but then again it takes resources to make paper towels. I think the difference is negligible and the rag idea recycles, and saves resources, and your towels 🙂

I copied the little ditty (for you here) that is on the card wrapped around the hotel rags, except the last line, which I couldn’t read because I didn’t move the rubber band before taking the picture… Doh! But this is most of it. I also wrote a simpler version that follows.

I’m nothing but a pile of rags, living a life forlorn… I am old, tattered, torn, but clean.

But wait!!! I can still be put to work… if you dear guest would give me a break… — USE ME.

Clean your shoes, wipe your makeup or clean the windshields of your car… I am tattered, but clean and ready to be used, in place of a “fluffy” towel.

Come the morning and your windshield is wet with dew and grimy with road dirt… use me instead of a towel.

When I am grimy and beyond your use, throw me on the floor to be… (and then whatever it said under the rubber band). Oh, well, you get the jist of it.

This is my own version of a rag ditty for your guests.

I’m nothing but a pile of rags, living a life forlorn… old, tattered, and torn.

But I’m clean and still have work to do, like wipe the mud from your shoe, or clean the windshield of your car that’s spattered with dirt or tar. Use it after you wash up, when left on your skin is a trace of makeup; that makeup looks so nice on your face, but on a fluffy towel is such a disgrace.

Your Charming Hostess who likes her towels