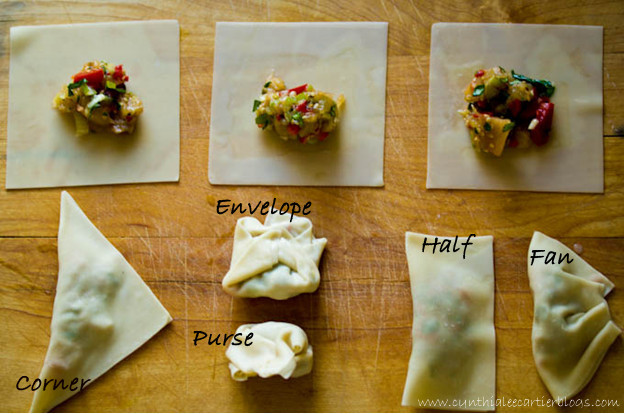 As an appetizer or cooked in soup, I love wontons, and they’re so easy to make. A lot of people are intimidated by the assembly process, which is simple if you’re organized so that you can fill them quickly to keep the wrappers from drying out.

As you assemble the wontons, put them on a tray and cover with a damp towel or begin cooking them while assembling the remaining wraps. It’s kind of like spinning plates, but very doable if you have everything laid out and your work area is clean and organized.

1. Gather: wonton wrappers, damp towel or enclosed airtight pack or container to keep the wrappers in, prepared wonton filling, teaspoon measure, glass of water, brush (or you can use your finger), tray to put assembled wrappers on before frying.

2. Layout the number of wonton wrappers that will fit on the work surface in front of you. Keep remaining wraps covered with a damp towel or enclosed in airtight packaging or container.

3. With a pastry brush or the tip of your finger, wet the edges of the wonton wrappers with water.

4. Place a level teaspoon of filling in the center of each wrapper.