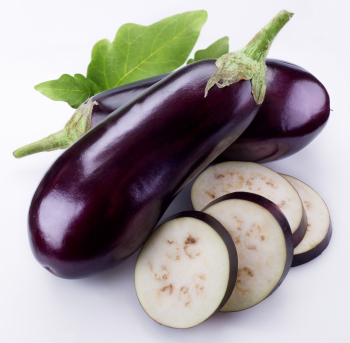 Eggplant — Cheers to the Purple Beauty!

This is a dig… I mean a post about eggplant for a dear someone in my life and anyone else here who can’t think about eggplant without Yuk! Eeewww!! and other terms of disgust coming out of their mouths, or at least popping into their heads.

Like Brussels sprouts, I think eggplant is one of the many misunderstood vegetables, and the reason is usually that people just haven’t had it prepared in an appetizing way.

Eggplant Parmesan, Moussaka, fried eggplant, Baingain Barta, Eggplant Masala, are just a few of my favorite ways to eat the pretty vegetable. I make an eggplant filling that I use in wraps and wontons for appetizers and for a Lemony Eggplant Wonton Soup.

In addition to being just plain delicious, eggplant is a good source of Vitamin K, Thiamin, Vitamin B6, Folate, Potassium and Manganese, and a very good source of Dietary Fiber. Along with vitamins and minerals, eggplant also has phytonutrients, many of which are antioxidants. The phytonutrients in eggplant include phenolic compounds, such as caffeic and chlorogenic acid, and flavonoids, such as nasunin.

Cooks are accustomed to peeling eggplant, but the phytonutrients and antioxidants from eggplant skin have also been shown to inhibit some cancer cells. Mostly found in the skin of eggplant, nasunin is a powerful antioxidant and free radical scavenger which has been proven to protect cell membranes from damage.